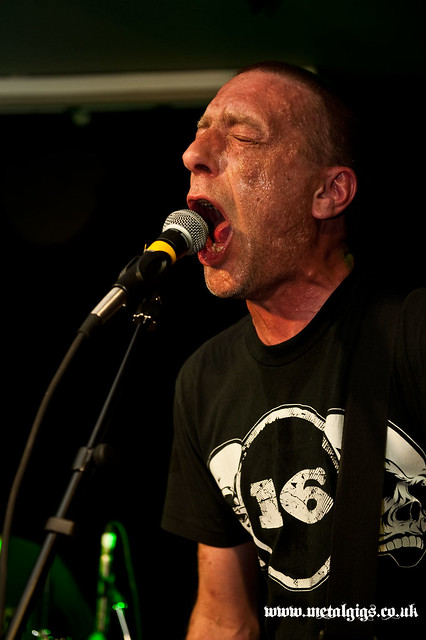 Grimpen Mire are streaming their new album for free.  We've had this on in the office for the last few weeks and it RULES.  Go take a listen at their Soundcloud here: 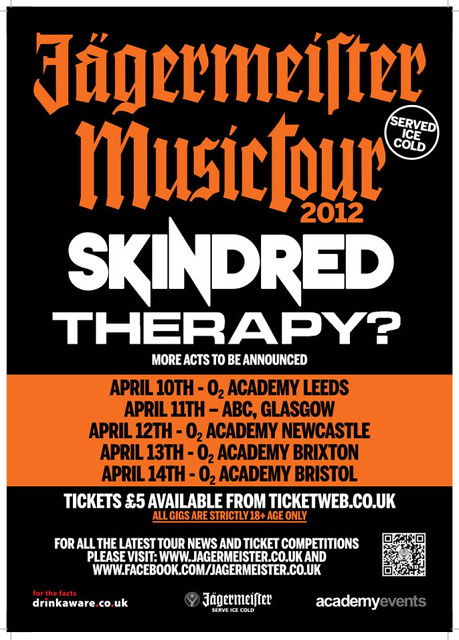 In August last year, purely coincidentally following a Morrissey gig, Brixton Academy was at the centre of the riots which caused mayhem across the city for several days. There really was panic on the streets of London. Fast forward several months, and Friday 13th April proves lucky for thousands of fans keen on a more convivial type of chaos – the Jagermeister Tour featuring four of the best bands in modern British heavy music. Even better, the tickets cost just a fiver, and this show sold out ages ago. 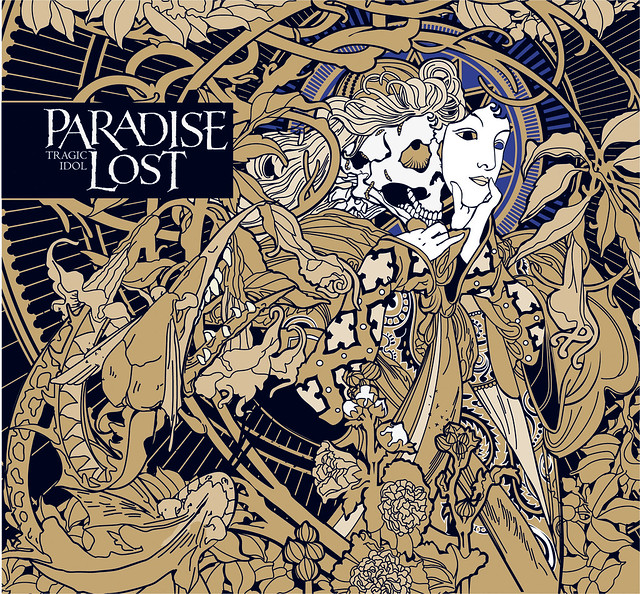 The number “13” has long been thought of as representing bad luck, but in this case that proves not be. Yorkshire doom legends Paradise Lost have produced a thirteenth album that should satisfy long-time fans and hopefully bring onboard new ones too. The five-piece have experimented with electronica and an almost commercial hard rock-type sound at some points in their career, but the trend more recently has been toward the classic sound of the early to mid-90s, when “Shades of God”, “Icon” and “Draconian Times” helped define a genre. Some years ago, Paradise Lost were labelled by some as “the British Metallica”, and as the US mega-band attempted with 2008's “Death Magnetic”, “Tragic Idol” represents a back-to-basics approach. It is the sound of a band who know what they do best. 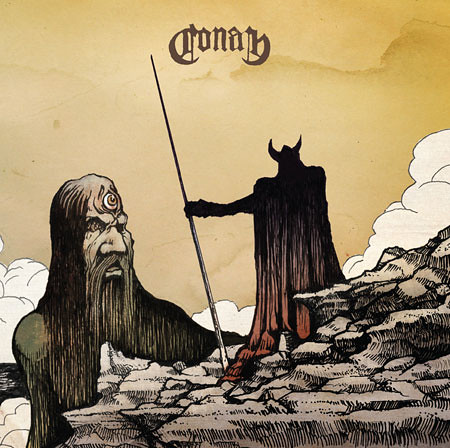 Having just returned from Roadburn we figured what better way to start back than with a review of Conan's new album Monnos.  The hype surrounding this band gets bigger everyday, and they played stage 01 at Roadburn to a crowd bursting at it's seams and spilling out into the outer corriders.  It was simple, if you got there late, you weren't getting in, and they absolutely destroyed the place along with a few eardrums on the way...

Darwinism be damned. Over the howling cycle of passing millennia, mankind has allegedly evolved from bacterial lifeform to troglodytic primitivism. From intrepid firestarter to destructive splitter of the atom. Not that I expect Conan give a shit. It’s probably fair to say “progression” doesn’t feature highly on their list of priorities. This is a band less concerned with reinventing the wheel and more preoccupied with exactly how hard to run the listener over with it.

A throwback to another time. One before vocoder vocals, polyrhythms and bass-drop breakdowns. This is the sound of purists playing with no regard to trends or scenes; endeavouring simply to create a timeless monument to doom.

But just because they possess a vision as singular as the cyclops gracing the cover, doesn’t prevent the band from standing out. In the short space of one EP and a split with

Metalgigs will be away at Roadburn for the next week.

Site creator Antony will be helping shoot and update the Roadburn website with lots of photos over the festival, so why not head to www.roadburn.com to catch up on what's happening.  This year's line up is amazing as always with Sleep, Yob, Necros Christos, Disembowelment, Agalloch, Ulver, Voivod, The Obsessed, Jesu and many, many more.

We will be continuing to update facebook and twitter whilst away so why not like/follow us to stay in touch with all the goings on... 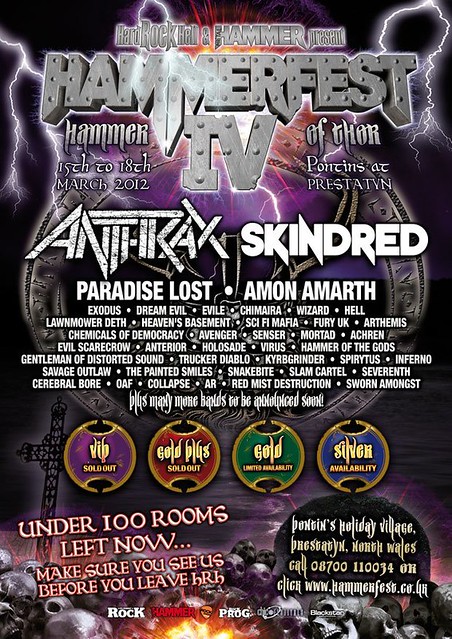 It is noon on a grey Saturday at a North Wales holiday camp, and heads are sore after the long night before. However, some hardy souls are up or have not even been to bed. Just as the previous day's action closed with the ridiculous spectacle of Lawnmower Deth, the bizarre duo Oaf have stumbled onto the small stage in the Queen Vic pub to begin the second day of Hammerfest in equally ludicrous fashion. One of them is recognisable as Metal Hammer's own Dom Lawson. It seems his, ahem, project is a form of music therapy. Arguably some may need therapy after prolonged exposure to Oaf-ishness! They are actually very funny, and Lawson drops some great stand-up style lines between the shouting, screaming, punk rackets. Apologising for a merch fuck up, he quips, “If you are a 4ft 2 woman with no boobs or a big fat fella like me, we've got T-shirts just for you!” Returning to the therapy theme, he explains one song is based on a Will Self book about mental illness, responding to a heckler with,

The line-up this year featured some true legends in the form of Big Four US thrashers Anthrax and Yorkshire's doom-driven Paradise Lost, plus Swedish death metallers Amon Amarth and eclectic, eccentric Welsh wonders Skindred – not to mention a huge bill of bands that may have been overlooked by others or new ones looking to make their mark.

The weekend includes fancy dress themes, band autograph sessions and a bustling market area where you can get tattooed, stock up on CDs, shirts and patches. Then there is the amusement arcade, open until 3am where hardcore party animals can win a giant-sized cuddly Winnie The Pooh to take to bed. Or not.

The event is all about the live music, and the bill covers numerous genres and tastes across three stages. There really is something that will appeal to everyone. Here are some of the highlights...

An interview with Aaron Aedy from Paradise Lost 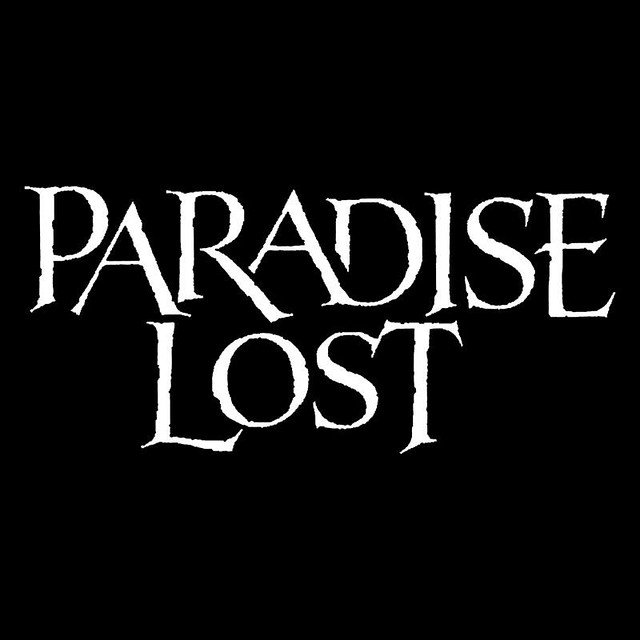 After days of glorious sunshine, ominous grey storm clouds gather over the hills around the North Wales coast. It coincides with the arrival of arguably British metal's greatest purveyors of doom, Paradise Lost, who are at Hammerfest 4 to play a special co-headline set with US thrash legends Anthrax.

The press area in Prestatyn's Pontins holiday camp, a room full of packed down billiards tables and lights, is buzzing. The mood is far from gloomy, and affable PL rhythm guitarist, Aaron Aedy,  shows the remnants of a tan after the band's recent trip to Australia. He is obviously keen to talk about the their new album, “Tragic Idol”, which will be released on 23rd April soon after their 24th anniversary. Other subjects include the forthcoming tour campaign, a fond farewell to long-time buddies Cathedral, happy BMX-ing memories of Pontins and being a tight-fisted Northerner abroad!

WIN A TICKET TO BOLTFEST 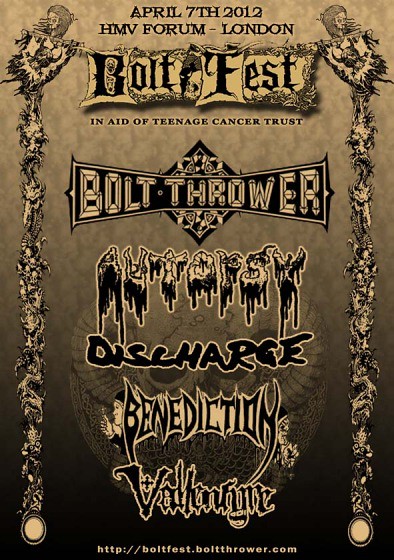 One of our writers is unable to make Boltfest so we thought why not give it out to one of our fans? 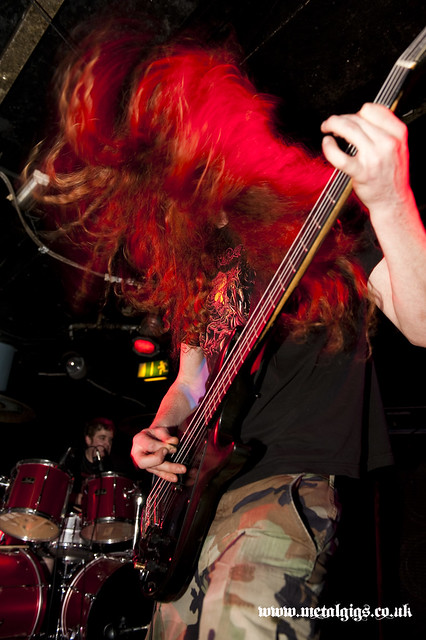 The Underworld is crusty at the best of times, but if there were a crust-o-meter system to measure the volume of beards, the essence of scraggly unwashed hair, the number of hoods up over baseball caps indoors and pairs of tight black jeans, tonight would surely be up there as some kind of new record. Seattle, Washington’s premier punk-thrashers Black Breath are in town to wreak havoc and destruction alongside a varied support bill of bands drawn from an equally gnarled darkness. One thing’s for sure, this ain’t gonna be pretty!