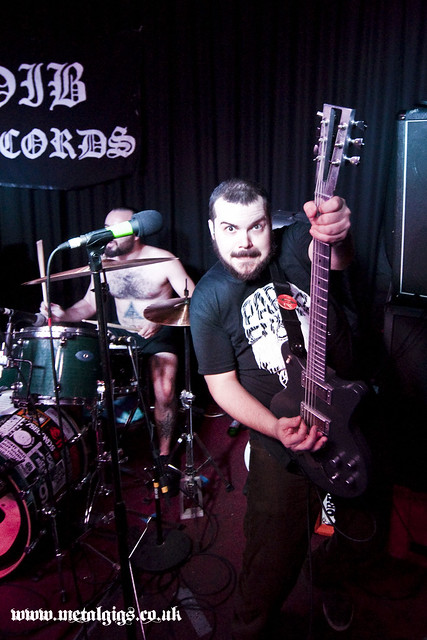 Miami's Torche have announced a string of dates in the UK for September.  They are as follows: 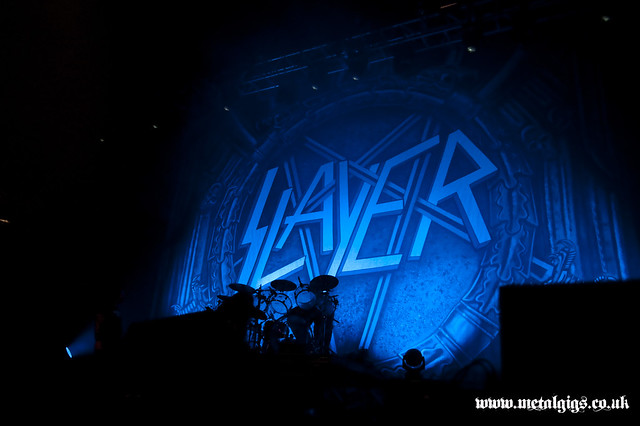 ATP I'll Be Your Mirror with Slayer, Sleep and more, Alexandra Palace, London, 25th May 2012

All Tomorrow's Parties festivals are not exactly known for metal line ups.  Sure sometimes they'll get a curator with wide musical tastes and they'll be a few heavier acts doted about on the line up, but generally they are quite a mixed affair.  It was with huge surprise that they announced that Slayer would be headlining one of the days at this year's I'll Be Your Mirror.  The surprise soon turned into general excitement in the UK metal scene when the rest of the support was announced.  Sleep were coming back for ATP, along with a lineup not to far away from the usual suspects to play at Roadburn Festival.

For those that didn't make it here's a quick overview of the festival and facilities, followed by a review of each of the bands that played. 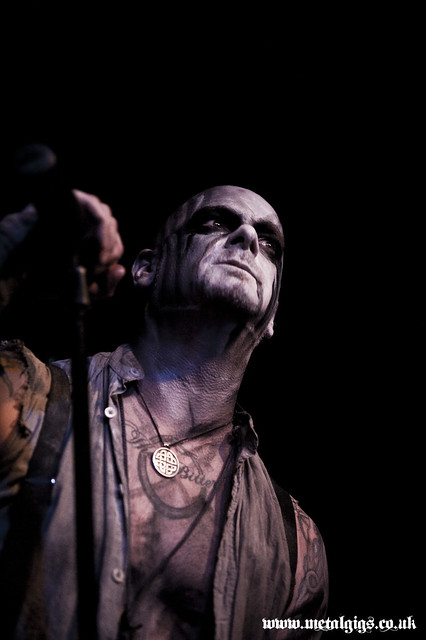 Winterfylleth may have to launch the blistering opening to “Mam Tor” in front of a half-empty hall, but by the time the song’s epic, woozy rhythms have come to a close any remaining pockets of space are rapidly filled by generous applause. Almost two years after the release of “The Mercian Sphere”, a regular presence on the live scene has built their reputation almost as much as their critically acclaimed LP.

Playing an atmospheric style more often associated with Eastern Europe, the Mancunians have recast the mesmeric, eddying riffing into their own mold of “English Heritage black metal”. It’s an embodiment perhaps best epitomised by “The Wayfarer Part I…”, from the imperial swell of the 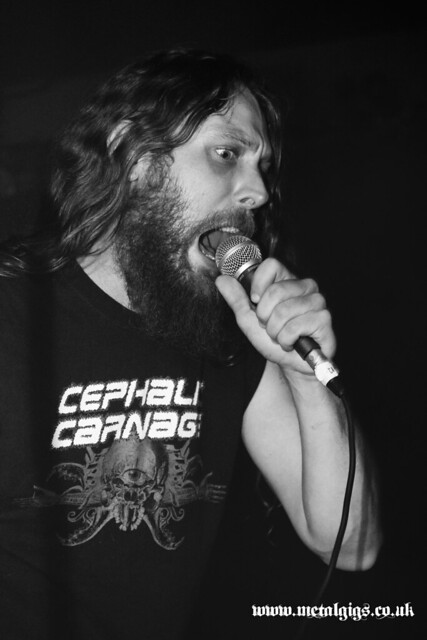 Thursday’s aren’t the most metal of days, and tonight London sadly seems more interested in the latest episode of Watchdog than the resurrection of Australian doom legends Disembowelment. Thus, we are greeted into the murky belly of Camden’s Underworld by the sight of Necro Deathmort summoning their spacey, sinister electro-doom in front of a measly crowd of about twenty people.

And it’s a shame, as AJ Cookson and Matthew Rozeik utilise the unusual guitar/laptop (and occasional bass) set-up to conjure an insidious sound that seethes under the sparse lighting; constantly shifting shape in the shadows and somehow emerging more malevolent than before.

At times, they can recall Aphex Twin at their most deranged or Axis of Perdition at their most lucid, while the band’s sound as a whole seems to consist of a unique legion of influences that echo genre-freaks as varied as Lustmord, Blut aus Nord and Massive Attack. On tracks such as “Temple of Juno”, dark dubby beats mutate and melt into ethereal effects, off-kilter guitar-lines and menacing screams. 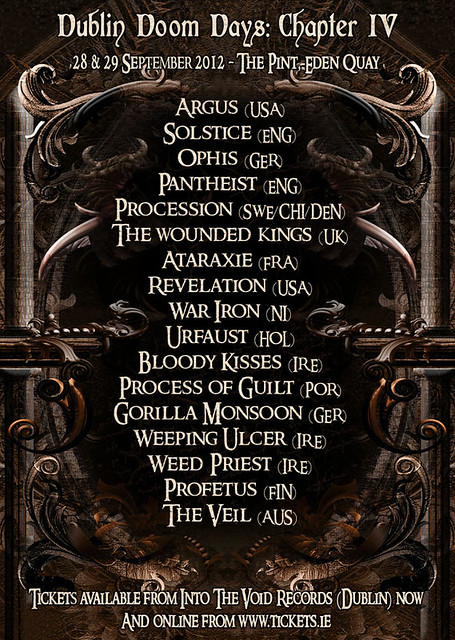 BLOODY BLOODY HELL!!!!! Somehow this one has escaped our attention until now.  Profetus?? Process of Guilt?? Urfaust?? Ophis?? Soooooooo there!!!

You can find more info and links for tickets, and all the bands on the events page here. 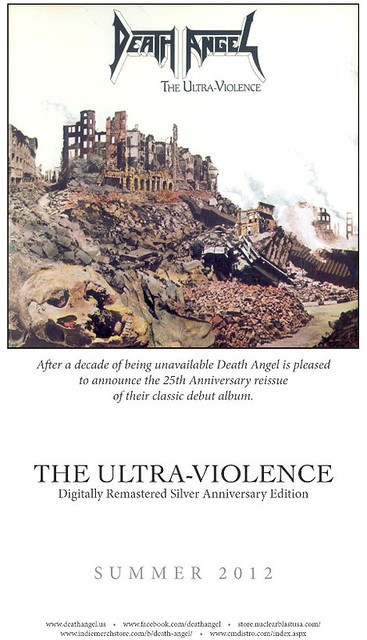 Woahhhh okay this one is a bit special.  Death Angel are re-releasing The Ultra-violence and playing the album in full on a tour which includes UK dates

Check out this update from Death Angel:

I am proud to announce that we will finally make our debut album, “The Ultra-Violence” available after more than 10 years out of print! Digitally remastered but, not altered – it sounds leagues better than the original pressing yet retains every ounce of vibe, character and 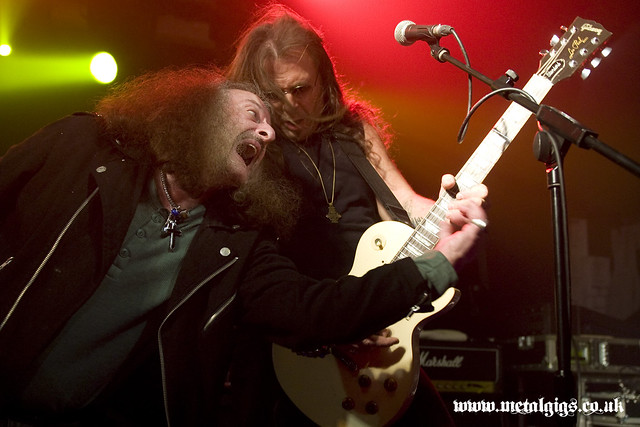 This is bloody awesome!!

PENTAGRAM have announce their first ever UK tour in the forty years they’ve been together in October and November 2012.

After the Doom pioneers first ever UK show in London last year Bobby Leibling and the boys return for four shows with Gentlemans Pistols as support:

Tickets are £15 and on sale now via www.ticketweb.co.uk

If you need convincing of why you need to go check out our review from their first ever UK date.  This happened in London in December last year here. 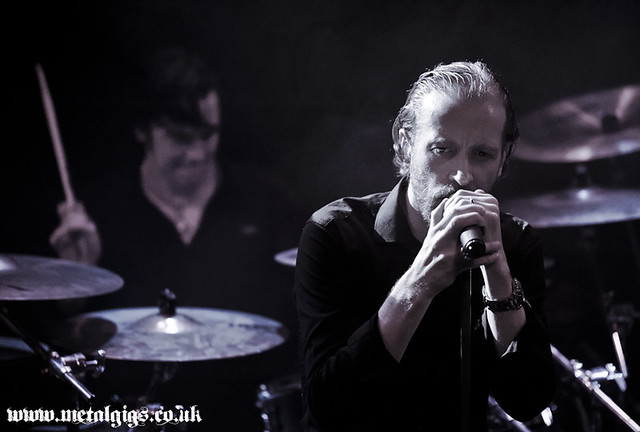 Days after the anniversary of Titanic's demise, it is perhaps vaguely appropriate that one of the greatest gloomy bands in British music history land in Southampton, the city from which the doomed vessel sailed just over 100 years ago. However, Paradise Lost have proved to be far from a sinking ship as they approach their quarter century next year. The nearest they have come to steering off course has been the departure of three drummers. That particular role has been ably filled since 2009 by possibly the busiest sticksman in metal, Adrian Erlandsson, who also plays for Nemhain, Brujeria and Swedish legends At The Gates. Phew! On what is their 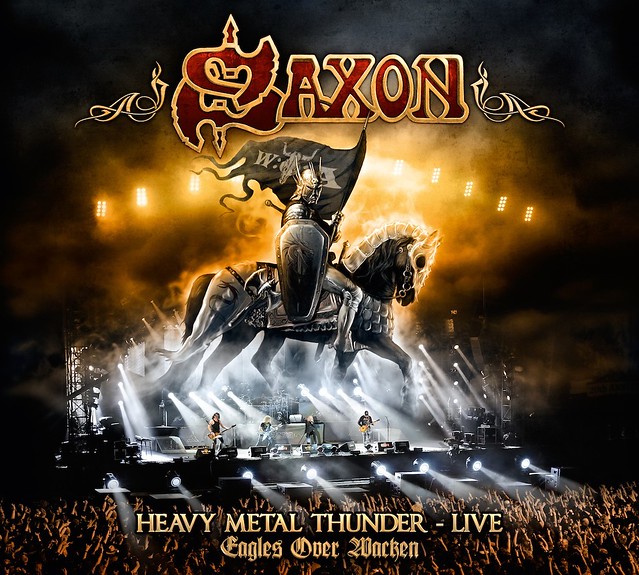 Saxon have just released Heavy Metal Thunder live coming in a ton of formats and we've got copies up for grabs!!!

We have already got a copy of the digipack and the CD up for grabs. We also have a copy of the Vinyl on it's way, but this is coming from Germany and should be here soon.

Read through to the bottom to find out how you can be in with a chance to win...

Heavy Metal Thunder – Live – Eagles over Wacken is available in several formats, including vinyl.  The release features DVD highlights from Saxon‘s Wacken shows in 2004, 2007 and 2009 comprising 30 songs, plus a live CD from Glasgow in 2011. The British heavy metal legends perform all their unforgettable classics, from Denim & Leather and Metalhead to Heavy Metal Thunder and from Princess Of The Night to Crusader, for the 75,000 strong audience of the traditional German gathering.